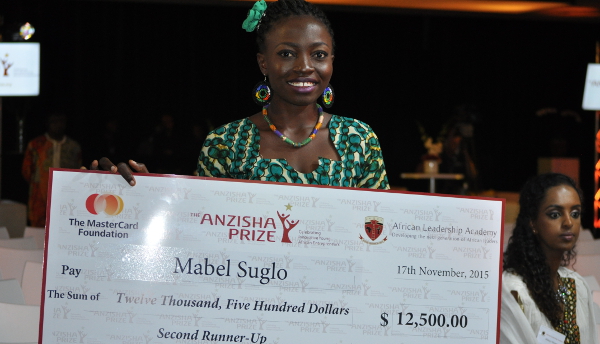 Ghanaian Mabel Suglo (21) is the young social entrepreneur behind EcoShoes, a company that employs people with disabilities to manufacture eye-catching shoes and accessories from discarded tyres and recycled materials. Her business is based in the city of Kumasi.

She started the company in 2013 when she was just 19, and two years later has been named the 2015 second runner up of the Anzisha Prize, Africa’s premier award for young entrepreneurs. The title came with a US$12,500 injection into her company.

The idea behind EcoShoes was inspired by her grandmother, who suffered from severe leprosy, a disease that can result in skin lesions and damage to the nerves, limbs and eyes. With deformities around the hands and feet, her grandmother had only one thumb.

But like many who suffer from leprosy, the real struggle came from the social stigma attached to the disease. Her grandmother was marginalised – a pariah that society feared due to a lack of understanding. She lived alone, and as a child Suglo saw how others refused to interact with her.

“I never really understood it when I was growing up, but with time started to realise what life must have been like for her,” she says, adding that her grandmother died when she was 12 but has remained strongly in her thoughts since.

“Then one day I went to town, and I saw a disabled man begging for money. One person didn’t give him money, but started telling him that he is good for nothing, useless, and that kind of thing. I just watched and had this mental picture of my grandmother. I really saw how we isolate these people. I thought it high time we make them feel welcome in the community.

“So I just walked up to him and I asked him if he could get a job that would pay better than begging, would he be ready to work? And he said yes.”

She did the same with a couple of other disabled, unemployed people, and very soon had made a list. She was determined to provide them with work, but was not yet sure how.

“The idea of using car tyres to make shoes came to mind… My grandmother actually used to wear bits of old car tyres for shoes because she had no toes and no shoes could fit her feet… So she just took a car tyre, cut it into short pieces and tied it with a rope and it worked well. Other farmers did the same too,” she recalls.

Suglo found two business partners who helped get her idea off the ground, and partnered with a local school for the disabled who trained those with disabilities how to make shoes from old tyres and local fabrics. Each pair is unique and sold through a small distribution network to various retailers across four regions in Ghana. Suglo is also developing the company’s e-commerce site to target a wider market.

Today the company employs five disabled people, and has the capacity to produce 200 pairs of shoes a month. Her team also manufacturers belts, slippers, bags and jewellery.

Suglo says she has faced a number of struggles as a young social entrepreneur. With no experience running a company, she admits she found the administration side difficult. And with also trying to juggle her studies in health science education, she has learnt valuable lessons about the importance of effective time management and delegating work to team members.

Her advice to other young entrepreneurs is to start saving as soon as possible, be patient and stay focused on their goal – especially during the tough times.

“Be determined because the road to success is not smooth, it is very rough… And don’t be just a big-talker. I think one problem many of us young Africans have is we talk too much – and we don’t have a lot of doers. Give it a proper try… and if you fail, just pick yourself up, shake the dust off and continue to try again,” she says.